See how we preserved the iconic 1754 Christ Church steeple. The Christ Church steeple dates to 1754 and is one of the few wooden structures of its kind still standing from the Colonial Era.

A cornerstone of Philadelphia’s landscape along the Delaware River, the Christ Church steeple was the highest structure in America for over 50 years. Since the Revolutionary era, the steeple has served as a symbol of revolutionary spirit and religious tolerance. In 2016, Christ Church Preservation Trust conducted a steeple investigation and learned that the icon was leaning two feet to the northwest and needed structural support to endure for centuries more. The Trust then commissioned John Milner Architects and structural engineers Keast & Hood to restore and rehabilitate the steeple and its supporting tower.

Phase One of the project, the interior restoration of the steeple and its supporting brick tower, was funded by The Pew Charitable Trusts, The National Fund for Sacred Places, The Raynier Foundation, The Crystal Trust, The Dolfinger-McMahon Foundation, and major individual donors.

Speaking of the 1754 Christ Church steeple, NEH Chairman Jon Parrish Peede said, “Every city has a heart. Every city had an idea that was greater than itself.”

In September 2018, the Commonwealth of Pennsylvania awarded the Trust a $1 million matching grant from its Redevelopment Assistance Capital Program (RAC-P) for Phase Two: the exterior restoration. Buoyed by this announcement, the Color Guard of the Pennsylvania Society of Sons of the Revolution (PSSR) donated $600,000, a transformational gift that allowed us to schedule the beginning of Phase Two work for June 2019. “Christ Church’s long and proud history as a beacon of American values and revolutionary ideas deserves our support,” said Eric Edward L. Guenther Jr., Captain of the Color Guard. “We look forward to celebrating the completed renovation.”

On March 27, 2019, the National Endowment for the Humanities announced a $500,000 grant towards the steeple project. At a press conference held inside the Christ Church sanctuary, NEH Chairman Jon Parrish Peede recognized the steeple as an enduring expression of the founders’ vision for Philadelphia. “Every city has a heart,” he stated. “Every city had an idea that was greater than itself.”

Two weeks later, the world watched in horror as fire consumed the Notre-Dame cathedral’s spire and roof. On April 17, 2019, after fielding questions about fire protection for the Christ Church steeple, the Trust decided to test its exterior water curtain, first installed in 1908. “One reason we did this was to show symbolic solidarity with Notre Dame,” Barbara Hogue, executive director of the Christ Church Preservation Trust, told the Associated Press. “But it’s also because we’re about to start renovations here, too, and we thought it was really prudent to start by testing our fire system, to be sure that, in the event something happens, we were prepared.” Hundreds of onlookers and members of the local and national press gathered outside to witness the test, and the drill ran on the front page of The Philadelphia Inquirer the following day.

As the Trust continued to secure the necessary funds to begin Phase II of the project, it appealed to the Old City community through a targeted marketing campaign that emphasized the need for exterior restorations.

Exterior restorations began in late August of 2019. Two months later, Apache Industrial Services took our team for an outside tour of the top of the steeple!

As part of the final phase of the 1754 steeple renovation, the team at Materials Conservation Co. removed the mitre, compass and vane from the steeple-top to their Kensington studio for cleaning and re-gilding. (The “Before” photo to the left shows the mitre before restoration. In the “After” image to the right, the re-gilded mitre returns). 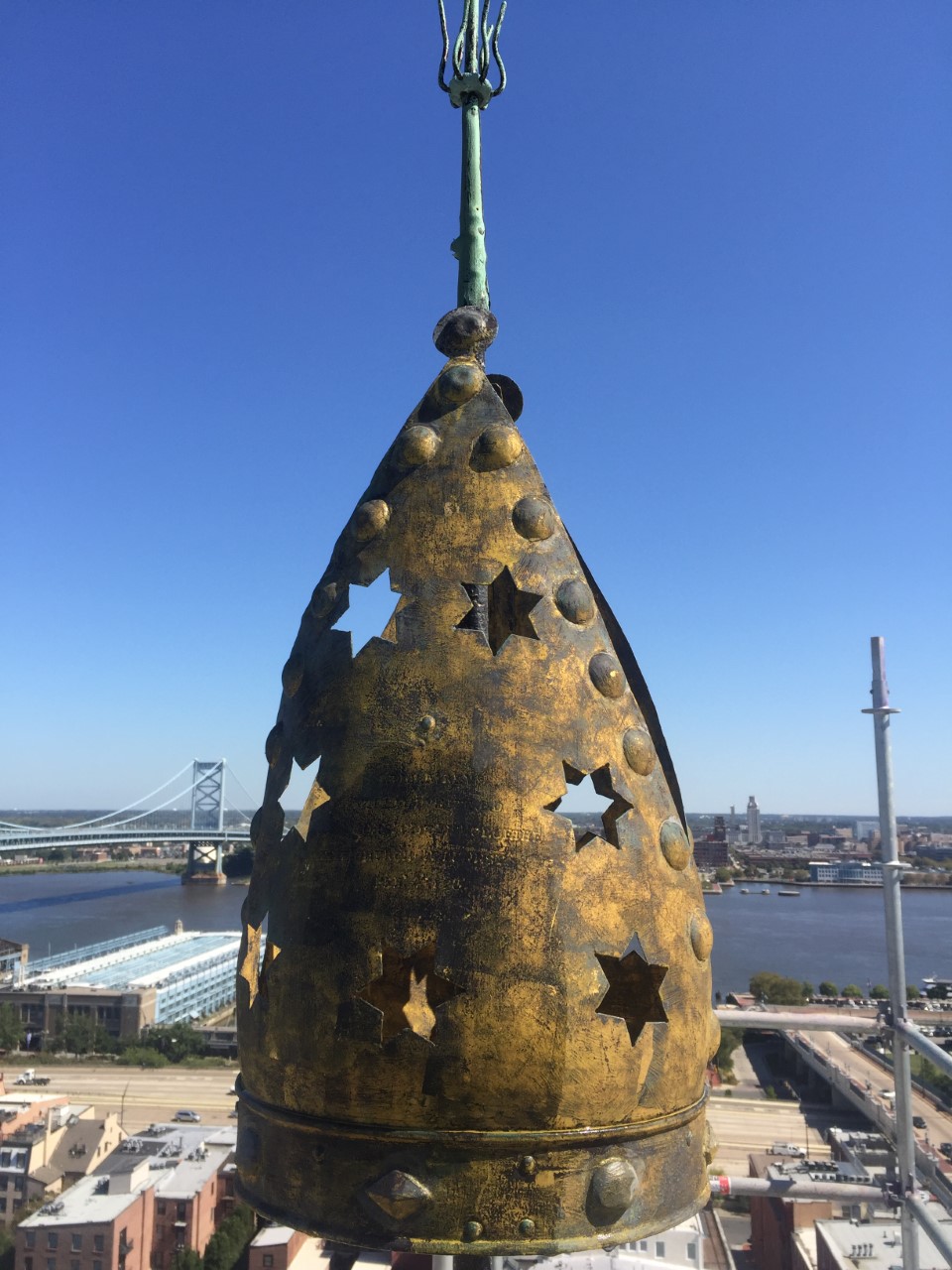 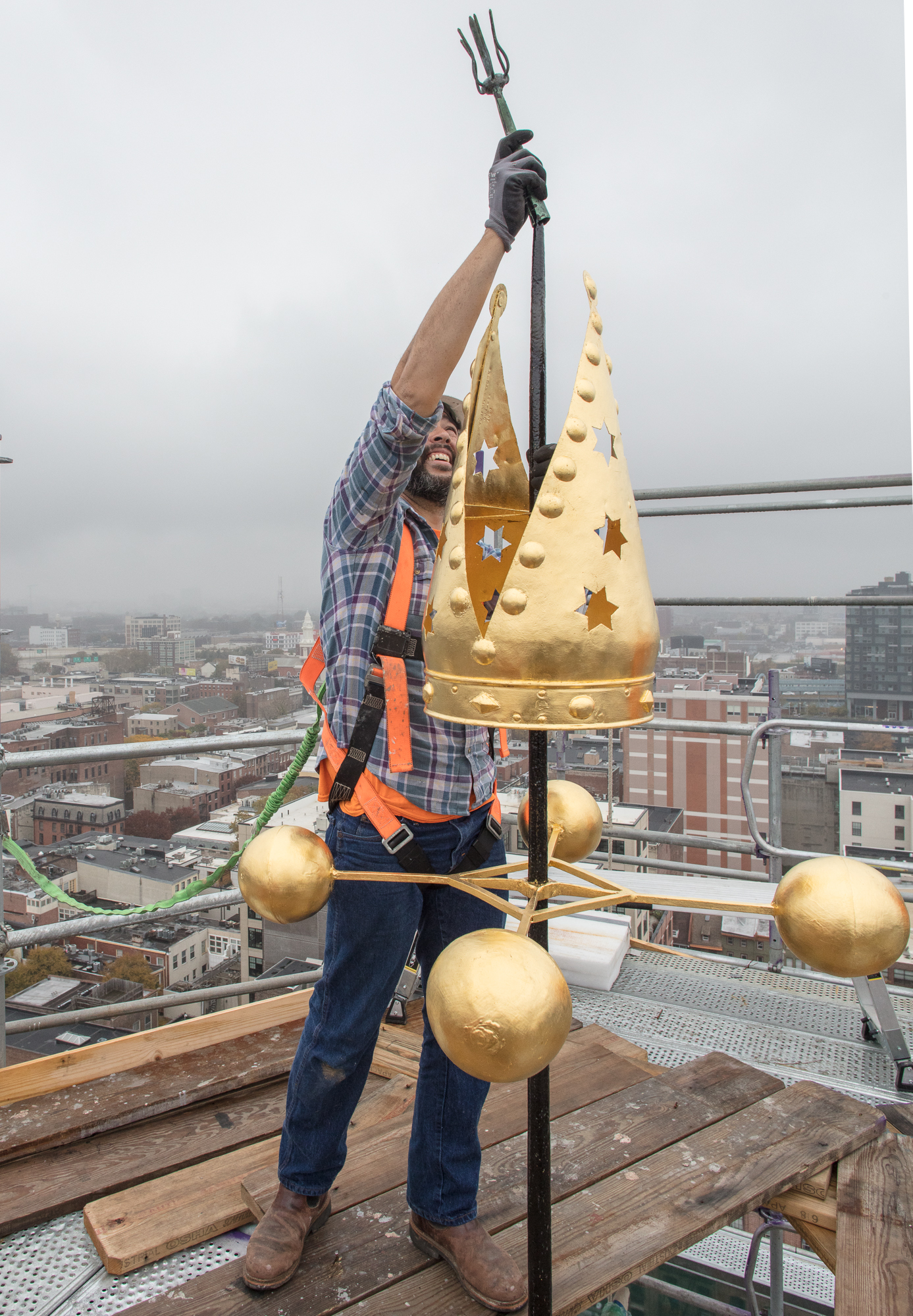 Christ Church Preservation Trust is indebted to the patriotic individuals, foundations and societies that helped raise the final monies for the steeple campaign.