About the Burial Grounds

Christ Church About the Burial Grounds

ABOUT THE
BURIAL GROUNDS

Come visit America’s most historic burial grounds, where Benjamin Franklin and other prominent leaders are laid to rest. 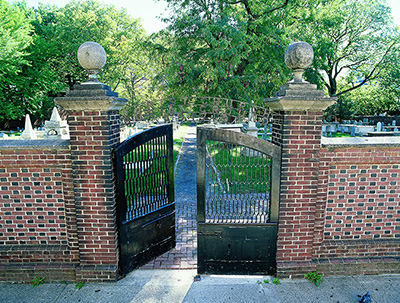 The Christ Church Burial Ground is just behind these gates on *5th and Arch Sts. in Old City Philadelphia.

For the remainder of 2020, the Burial Ground will be open Wednesdays through Saturdays from 12- 4 p.m.

Before the establishment of the 5th Street Burial Ground in 1719, Christ Church buried the earliest members of the congregation in the churchyard, a common Christian and European practice. When burials began to take place on the outskirts of cities (largely to prevent disease), and the churchyard became filled, Christ Church purchased two acres of land on the outskirts of town at the corner of 5th and Arch Streets. 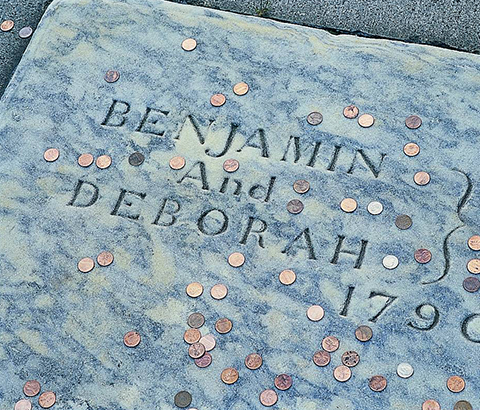 Franklin aficionados sometimes toss pennies on his tombstone — a practice that has contributed to the deterioration of the marker.

The Burial Ground became the final resting place for over 4,000 members of Christ Church, including five signers of the Declaration of Independence: Benjamin Franklin, Joseph Hewes, Francis Hopkinson, George Ross, and Dr. Benjamin Rush. Also buried on these sacred grounds are many of our nation’s early leaders, prominent lawyers, medical pioneers, military heroes and victims of the Yellow Fever epidemic.

When Benjamin Franklin died in 1790, he was buried along with his wife Deborah and their two children, Francis and Sarah, in a family plot in the northwest corner of the grounds. For years, popular belief held that in 1858, Franklin’s descendants requested that an opening be placed in the brick wall surrounding the cemetery so the public could see Franklin’s grave day or night. The installation of a metal fence made it much easier for Franklin’s many admirers to toss a penny onto his family plot in honor of his famous words, “A penny saved is a penny earned.”

In a 2017 article, Mark E. Dixon attributes the metal fence to Philadelphia’s leaders, not the Franklin family. Dixon’s narrative traces the project, “a 19th century public relations campaign” to the publishing community and preservationists who, among others, sought to ground Franklin’s legacy in Philadelphia. 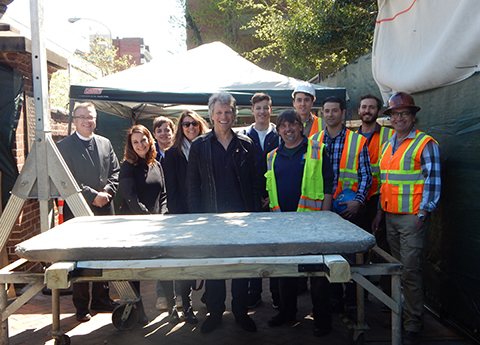 Singer Jon Bon Jovi met with members of the Christ Church staff and our Preservation Trust for the Franklin grave dedication.

Since Franklin’s death in 1790, a simple marble ledger tablet has distinguished his resting place. In 2016, Christ Church Preservation Trust hired architectural conservators to repair a significant crack that threatened the integrity of Franklin’s grave marker. The team also restored other areas of deterioration at the Franklin family plot, including the Franklin tablet’s marble face: for years, the practice of throwing pennies at Franklin’s grave — an homage to the adage “a penny saved is a penny earned” — pitted the marble surface.

The Trust raised $76,000 for the work, an amount that included funds from the University of Pennsylvania, the Pennsylvania Historical and Museum Commission, the Florence Gould Foundation, and a successful crowdsourcing campaign largely funded by rocker Jon Bon Jovi and his wife Dorothea.

At a public ceremony in April 2017, the Trust unveiled the restored family plot. 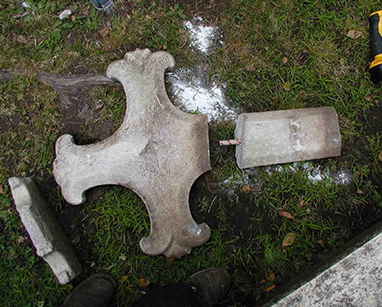 The Burial Ground was closed to the public from 1977 through 2003. In 2002, Christ Church Preservation Trust undertook a major program of renovation to reopen the site to the public. Projects included restoring 150 grave markers (many by pinning and mortaring broken pieces) and rebuilding parts of the exterior brick wall (first constructed in 1772). Landscapers tended the overgrown grounds, removing ivy, pruning trees, creating new paths and installing turf

If you would like to contribute to Burial Ground preservation work, perhaps by contributing to the care of a specific grave marker, please contact Burial Ground Manager John Hopkins or donate here.

For the remainder of 2020, the Burial Ground will be open Wednesdays through Saturdays from 12-4 p.m. Please wear a mask. A $5/person admission fee ($1/kids) includes a self-guided map tour. Group tours will resume in 2021.

The Burial Ground is open weather permitting from March through November during the following times: Monday through Saturday from 10 a.m.–4 p.m., and on Sunday from 12 p.m.–4 p.m.